Book One of the Cat Lady Chronicles 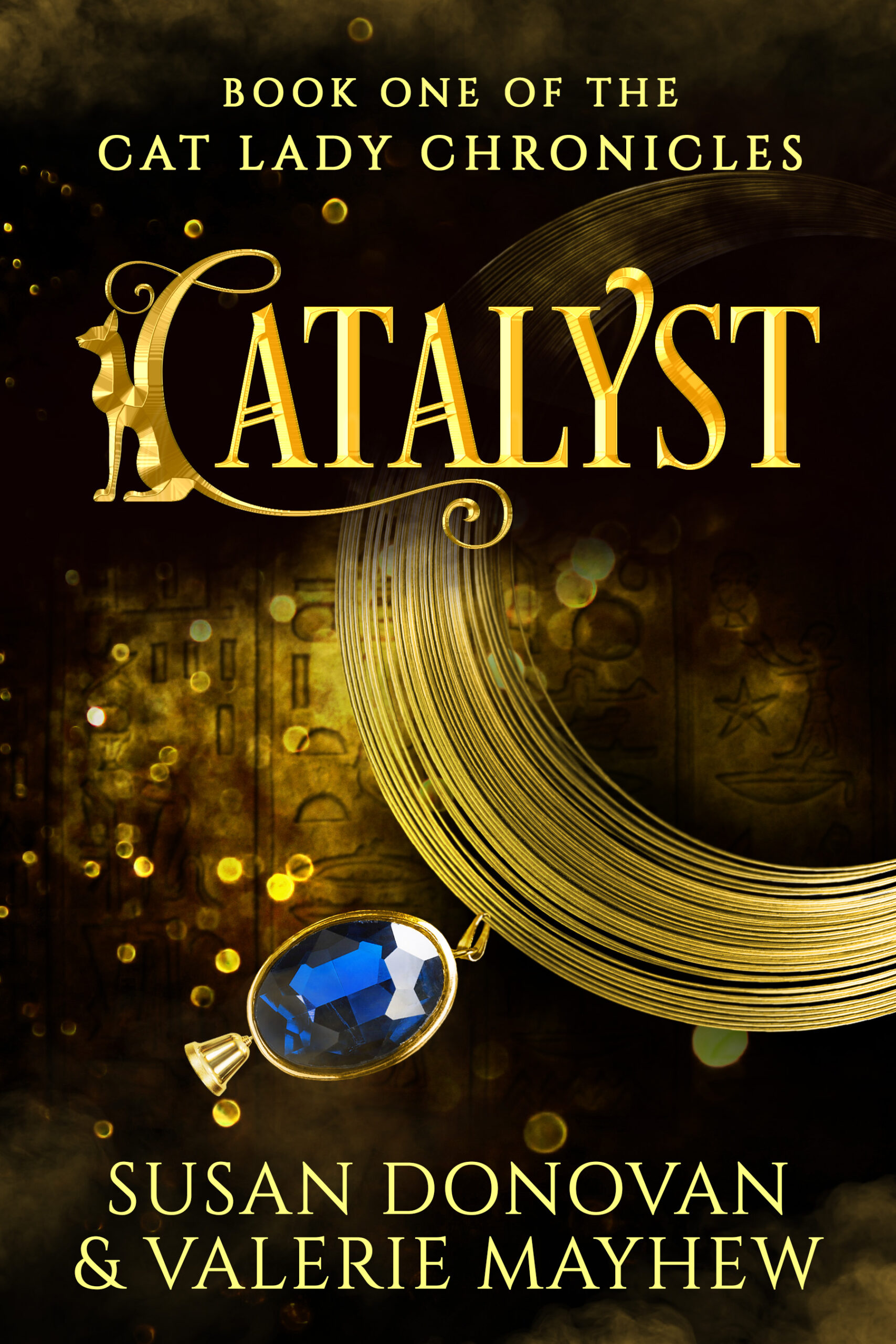 Felicity Cheshire has survived cancer, medical bankruptcy, and the world’s slimiest ex-husband. Now she’s about to be evicted from the ramshackle Airstream on the Oregon coast that’s home for her and her twelve rescue cats.

When her car breaks down during a freakish rainstorm, Felicity spies an injured tomcat on the roadside and thinks, “how much trouble can one more be?” A lot, as it turns out. Soon there’s a naked mystery man in her bed and her small-town, middle-aged existence careens to WTF? territory.

Two weeks to save the world.

With her posse of badass BFFs at her side, Felicity takes a terrifying journey from has-been to hero, where she must face her darkest fears in order to save those she loves. She might even have to attempt sit-ups.

From CATALYST, Book One of the Cat Lady Chronicles

She was going to strangle him. Seriously.

“Three sit-ups?” Tom’s expression was a mix of disappointment and horror. “You can’t be done. You’ve only done three barely sufficient sit-ups.”

Felicity crumpled to the patch of grass between the garden and junkyard fence, the most private spot they could find for training. She flopped an arm over her eyes. “I haven’t attempted a sit-up since my sadistic gym teacher, Mrs. Frankel, threatened me in eighth grade.”

“I’m serious. She told me if I couldn’t do ten sit-ups in a row, she’d make sure I never made it to high school.”

“Without the ten sit-ups?”

Tom took several slow deep breaths. “Bastet’s powers course through your veins. You need to trust in that and push yourself beyond your self-imposed limits.”

Felicity just stared up at him. “Where do you think the three barely sufficient sit-ups came from, Tom? That was Bastet’s powers, as applied to me, Felicity Cheshire, a cranky fifty-two-year-old lady.” She struggled to stand. Tom reached out his hand to assist her, and she smacked it away. Eventually, grunting loudly, Felicity reached an upright position. It took a lot of work.

“Well, now you do. So fuck you, and fuck your sit-ups!” She headed toward the trailer stairs, but Tom snagged her arm.

“How about push-ups? Can you do those?”

“Yes, but only the girl push-ups where I’m allowed to let my knees touch the ground.”

“All right.” Tom let his gaze travel over the property, his attention landing on Mrs. Romero’s T-shaped laundry pole in the side yard. It seemed like yesterday when Tasha’s mother, dressed in a jumpsuit with jumbo shoulder pads, had hung sheets on the clothesline while a Virginia Slims menthol hung from her lips.

“Would you at least try?”

Tom popped up from the step and clapped his hands. “Race you to the pole!”

“Race? As in run?” The last time Felicity had run, for any reason, was the day she ran from ex-husband’s house after being served with surprise divorce papers. And that was only because she’d been in shock and was having an out-of-body experience.

Tom grabbed her arm and pulled her along. No matter how hard she pumped her legs, it was a struggle to keep up. They made it to the laundry pole, but instead of slowing, Tom made a U-turn and headed back toward the trailer, pulling her with him.

Only then did she see Felonious Jim on the front porch, his pie hole gaping open in stupefaction.

When they reached the laundry pole again, Tom tested the steel, ensuring that it was cemented in place. “Up you go.”

Tom grabbed her around the waist and lifted. She slapped her palms to the cool metal and gripped her fingers tight.

“Lift your knees. Keep your elbows pointed to the ground. Make sure your chin clears the bar.”

Felicity could do none of those things, and her arms already quivered. She looked down to see her feet pedaling through the air.

Just then, Felicity saw that Tasha had joined Jim on the porch. They both stared, slack-jawed.

She strained. She pulled. But even with Tom supporting her weight, she could not get her chin anywhere near the T-bar.

“You’re not even trying.” Tom gritted his teeth and added, “Lasciami in pace pezzo di merda.”

“Oh, yeah? Well, fuck off!” Felicity kicked at him until he released his grip. She immediately hit the ground and collapsed.

“Back away!” She scrambled to her feet and walked briskly—but did not run—toward the trailer. “I’m done. That’s it.”

He was right behind her. “That was just the warm-up. We haven’t even begun Step One.”

“If Step One doesn’t involve my foot in your ass, then it’s not on the agenda.”

Felicity ignored him, retreated into the trailer into her little bedroom, shut the accordion door, swallowed two aspirin, and fell on top of the comforter.